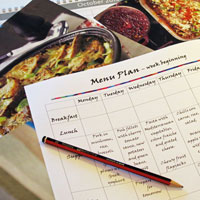 If it’s true that time seems to go faster as you get older then I must be about 102.
I mean – where did last week go?

At least the weather has cheered up – we have now had the third day of sunny weather this summer in our part of the UK (yes, I am counting). Hopefully we’ll have a few more before we hit Midsummers day at the end of the month.

Three days does not a summer make, but the weekend was fab and we got out on the water in the kayaks. Which meant that I took note when I read that 10th June is apparently the anniversary of the very first time that the SOS morse-code signal was used in an emergency when a liner was sinking off the coast of the Azores in 1909.
Fortunately we had a great time in the kayaks and didn’t have to call anyone for help.

But after a lovely weekend, it’s back to reality – and menu planning.

Last weeks menu plan survived relatively intact. Salmon with Orange and Watercress was declared delicious, and I finally managed to make the Peaches in Raspberry Sauce.

Foccacia with garlic and rosemary

Have a great week!

What price tinned tomatoes? And a budget recipe: Sausage casserole

Living Below the line?

This entry was posted in Weekly Menu Plan. Bookmark the permalink.