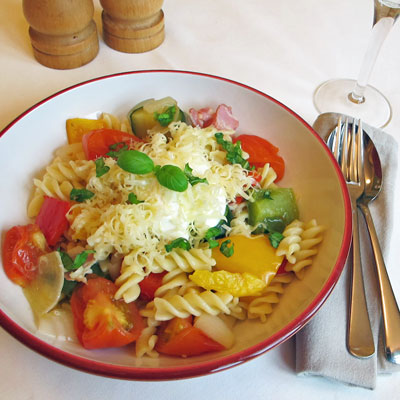 My week hasn’t started well. Having menu planned at the weekend, I then did the on-line shopping only to end it so late that they had locked out all the delivery slots for the next day. Then yesterday, I had to take my Mum to the doctors so didn’t have any time to write posts. So here we are at Tuesday, and to be perfectly honest I would have probably missed this week except for the fact that I did say (at the beginning of November) that I would try a whole month of budget menus, and this is week four.

So how’s it going? Last week’s highlight was the Smoked Mackerel Risotto – smoked mackerel is my new favourite food. And I will post the Chicken and Mushroom Orzotto and Chicken Korma – both great ways to use up cooked chicken.

On to this week – I’ve given approximate prices here – not because I haven’t worked them out exactly, but it is difficult. For example, say that a recipe calls for half a tub of creme fraiche, but you end up not using the other half – do you end up costing it at 38p for the half that you use, or the 77p it cost for the whole tub?

As usual I’m linking up with Mrs M’s menu planning Monday – where you can find lots of other ideas from all the lovely meal planners there.