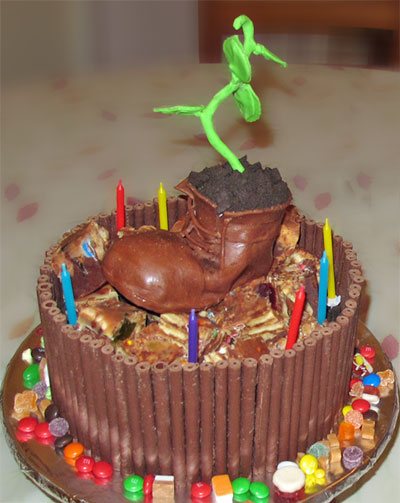 Birthday cakes are a bit of a challenge aren’t they? Not only do you have to find the time, but also the creative inspiration and artistic talent to create something that may rival the fantastic Angry Bird cupcakes that xxxx’s (insert name of best friend) Mum made for the class last month!

Fortunately things have changed somewhat now that my children are older, as the tradition of taking cakes in for the class doesn’t seem to have survived the jump from junior to senior school. But despite that birthday cakes are still anticipated hugely and (sometimes it feels) are judged mercilessly!

Wall-E has been a firm favourite in our family since the film came out a few years ago – so this year I decided to try to make a Wall-E cake.

Making the whole robot in cake and icing seemed too difficult (how do you make the arms stay up?) but as I’ld recently discovered modelling chocolate, the boot + plant + rubbish seemed a possibility.

So I started with Lorraine Pascale’s ‘I can’t believe you made that Cake’. The chocolate cigarillos are simple and incredibly effective – not entirely eco-friendly though I have to admit. The only place I could find that sold them was Amazon, and as they are pretty fragile this small box of cigarillos arrived in a massive cardboard box packed with polystyrene shapes to make sure that they didn’t fragment along the way.
So far – so good, but for the rest of it – really – strawberries weren’t going to cut it for a birthday boy, and for Wall-E, of course, it just had to be (edible) ‘rubbish’!

Crushed Oreo biscuits make very realistic dirt as you can see in this photo here – so a thick layer of crumbs were scattered on top of the butter icing. It was so realistic in fact that I was asked if all the cake was edible!

Those of you who have seen Wall-E (and if you haven’t you should) will know that he is programmed to collect rubbish and crush it into small cubes. So what better to mimic this but Rocky Road? Nigella’s recipe is gorgeous and made with a mixture of both milk chocolate and white chocolate coloured with orange food gel – and a variety of different coloured small sweets instead of marshmallows – it made a passable mound of ‘rubbish’.

And then there was the boot! Modelling chocolate is surprisingly easy to work with (and also delicious!) – although there is the rather tricky conundrum of getting it soft enough to work with but not too soft that it sticks to you. It took me a couple of attempts to get this shape – I ended up moulding the front of the boot in marshmallows that I then laid the chocolate over as without something to support it it tended to collapse in on itself.

Finally: the plant – the trickiest bit I found. Fortunately I have a friend who is into cake making who ‘lent’ me some cake wire, tape and leaf moulds – and with some Electric Green fondant icing I was away!

I cut the leaves out the day before so they could dry, and made a wire skeleton for both stalk and leaves covered in tape. The leaves were stuck on with thin layers of fondant icing beneath – and were incredibly fiddly and difficult. In the end they were the least successful part of the whole, but I found the more I fiddled the more fragile everything became and the more likely the leaf was to disintegrate! But no-one complained in the end – I think they were too busy eating the rocky road!

This entry was posted in Baking and tagged Cakes, Chocolate. Bookmark the permalink.
This site uses cookies: Find out more.