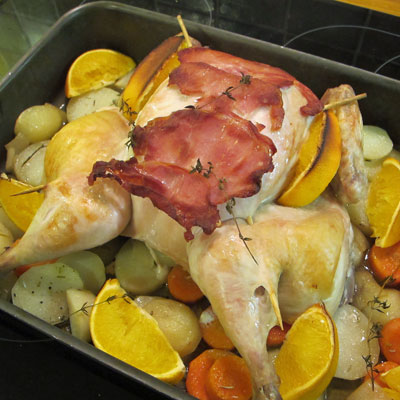 Apparently we throw away the equivalent of 86 million chickens every year (so it says here).

Where do we keep them I wonder? With those sort of numbers you would think that we should be tripping over them as you walk down the street. No wonder that the article goes on to say that the British Poultry Council is warning that we might run out of room to rear them.

But back to the ones that we don’t eat, all those chickens that end up in the bin are reportedly part of 4.2 million tonnes of avoidable food waste that we generate every year.

Or, put another way, we throw away the equivalent of:

Cutting costs does mean cutting waste. Since I’ve been trying to reduce our bills I have been much more aware of portion size. Measuring out quantities of rice, pasta and veg before cooking has cut down considerably on the bowls of leftovers that sit in the fridge for a few days waiting ‘to be used up’ before being thrown them out as being past their best.

Despite this I know I still throw away more food than I should. Maybe this week I’ll try to keep a note of what we do throw away that could have been eaten. I’ll let you know how I get on – I think the result may be scary!

So with all this talk of wasted chickens ringing in my ears it was ironic that Student Son chose Roast Chicken as his last home-cooked meal before going off to Uni to eat his own cooking for the next few months. I was determined that not a single morsel of my chicken is going to end up contributing to those wasted millions!

As a result we’ve now had Roast Chicken dinner for four, Chicken Kurma the next night and there is 200g chicken and 2 litres of chicken stock sitting in the freezer.

Roast Chicken with all the trimmings

Thursday
Roast Tomato, basil and feta tart
(use up remains of feta)

Here are some other ways to use up leftover chicken that look worth a try (we’ve only tried the first three):