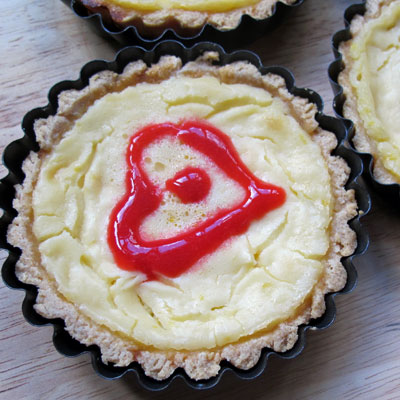 I seem incapable of making anything that doesn’t have lemons in it at the moment.

First there was Lemon Shortbread – then Apple, Cinnamon and Lemon Pancakes –
and then there was Warm potato salad with yoghurt lemon and chive dressing (no I haven’t given you that one yet but it will be coming up soon) – and today it’s Lemon Tarts!

But of course, they are Valentines Lemon Tarts.

We don’t always make much of Valentines Day – but it’s a good reason to have a bit of a special meal. Today that will be a bit difficult as we’re all getting home at different times, so will probably end up eating separately (not very romantic I accept!). But we can at least share a Valentines pudding later.

Lemon Tart is one of those recipes that I’ve always meant to cook but never quite got round to. Among the potential recipes I found one from Delia. She starts by saying that she once spent a long time developing the definitive Lemon Tart recipe, so what could I do but put it to the test?

I made them (the day before) according to the recipe which you can find here, but I made individual tarts rather than one deep one. The amount of pastry was about right for 4 tart-lets with only a little left over, and I liked her method of baking blind – no mention of baking beans just brush the insides with beaten white of egg and cook for about 12 minutes.

The quantity of filling was way too much and I reckon would have done about three times as many tarts as I was looking for! But the end result is good and intensely deliciously lemony.

Rather than serve them with cream or creme fraiche we had raspberry puree (like the one here but using about 150g of frozen raspberries). A word of warning, if you’re decorating them, do it just before eating or the raspberry puree smudges. Ours looked a little fuzzy by the time we came to eat them – but, no matter – they were delicious!

This entry was posted in Desserts and tagged lemons, puddings, raspberries. Bookmark the permalink.
This site uses cookies: Find out more.