Honey and Mustard Glazed Ham and a Budget Menu Plan 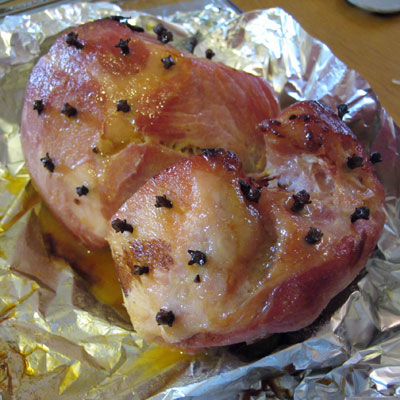 Does it sometimes feel as if the Credit Crunch has been going on forever?

If your answer to that is (like mine) a resounding ‘YES’, it turns out that the reason we think that is – because it has. Yep, this month is apparently the five year anniversary of the start of the Credit Crunch.

At times it has felt as if prices in the supermarkets are going up almost as you watch. And with an ever-hungry, rapidly-growing family of meat-eaters, one of the things I’ve been looking at to try and reduce costs, is using some of the cheaper cuts of meat – pork cheeks, brisket and of course gammon.

Gammon is usually at the cheaper end of the meat counter, but this month I was rather taken with the Sainsburys multi-buy offer – three 750g gammon joints for £10 – which makes the grand sum of £4.44 a kilogram! (usual price £5.72 / kg so not expensive)

It does take a bit of time to cook of course – this is not the sort of meal you whip up in under half an hour in the evening. But that seems to be the problem with most ‘budget’ cooking – it’s difficult to find meals that are BOTH cheap AND quick.

However, once your hams are cooked (and I did this at the weekend), you then have the makings for several quite quick meals that are suitable weekday after-work food.

Cooking three gammons at once seemed too much of a challenge (although in fact it would have been fine and saved time) so I started with two and roasted them.
And from two hams you can get several meals:

Not bad value is it?

Total cost for 6 meals is just under £22

And if you think that is enough – there was of course a third ham. That has also been roasted, this time in a Honey and Thyme glaze, and will be frozen – as will some of the other ham as I don’t think we’ll want to eat ham EVERY night for the next fortnight!

The recipes for roasting the ham are here – the first is the more classic Honey and Mustard Glaze. My youngest thought there was a bit of an ‘odd’ taste to it, which I thought might be the cloves, so I went for a sweeter Honey and Thyme Glaze the next time. It is really quite sweet, which we thought offset the flavour of the ham beautifully, but make sure you taste the juices before you pour them over your plate!

There are lots of recipes using leftover ham – here are a selection:

As usual I’m linking up to Mrs M’s Meal planning Monday where you can find other ideas for meals.