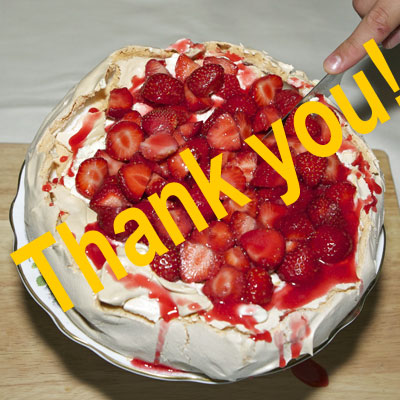 I have to say a BIG thank you to every one who commented last week and said how impressed they were with the cake my son made me for my birthday. He was so pleased with the results that he has been cooking all week – it’s been great to come home each evening to yet another gorgeous creation.

…and Vanilla swiss roll with raspberries and cream filling – which I can’t show you as we were concentrating more on eating it than taking pictures.

This meant that we had a few egg whites to use up, so last night he decided that he just had to make Strawberry Pavlova with Raspberry Sauce (we didn’t argue).

The recipe came from Mary Berry’s book called ‘Simple Cakes’. It’s a great book – clear instructions, and truly delicious recipes which always seem to turn out just as they should. You can also find the recipe here. Meringue is one of those things that I don’t cook very often but I can honestly say that I did almost nothing for this – oh, except muster the energy to eat it.

So – thank you for all the encouragement! I’m hoping that he’ll feel enthused to carry on doing some cooking during the holidays. Of course that means that my hips might be as wide as the River Thames by the time term starts again but, hey it’s worth the sacrifice if he gets to learn to cook!

This week I am aiming mainly for simple, quick meals that I can get together quickly after work or that the children can start making before I get home – I haven’t added any puddings just in case someone else has other ideas!

Ham and Sweetcorn mini-quiches (to use up leftovers)

Do your children enjoy cooking? How do you get them interested in learning?

This entry was posted in Desserts, Weekly Menu Plan and tagged puddings, strawberries. Bookmark the permalink.

6 Responses to ‘Simple Cakes’ and a Weekly menu plan