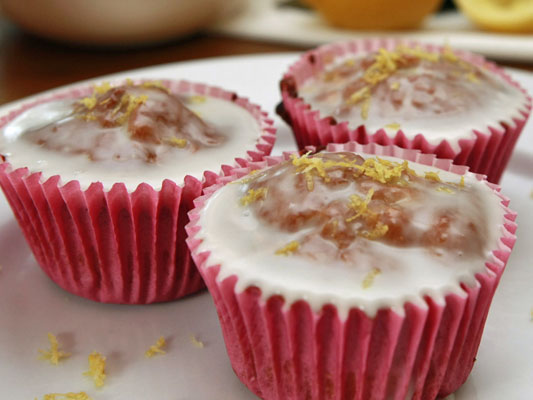 There is something out-of-this-world-delicious about a good apple cake.
They used to serve Dorset Apple Cake sometimes in our work canteen, and it was a real treat if you could get down there to find that (i) they were selling it that day, and (ii) there was some left by the time you got there!

And then Disaster Struck.
They changed suppliers – and the new supplies of Apple cake are definitely Inferior.

What could I do, but try and create my own recipe – and I have to admit that I’m rather pleased with these.

They don’t claim to be the same as the Lost Apple Cake but actually I think (although I shouldn’t say it) these may be even better than the original. Perhaps it is because they are cupcakes rather than a whole cake, but there is quite a high proportion of apple in them which makes them lovely and moist. With a hint of lemon and cinnamon and with lashings of lemon drizzle icing over the top, they are pretty irresistible! They don’t keep for long – in fact I have to be honest and say that I don’t know how long they keep for as we’ve never managed to keep any for more than a couple of days! – but I’m sure you could keep them for longer.

Whatever – here they are – with a patriotic touch. What could be more English than apple cupcakes decorated in red, white and blue to celebrate the Jubilee?

(Makes 24 fairy cakes, or 11 cupcakes)
Fridge to table time: about 45 mins by the time you’ve iced them

Cream butter and sugar together until pale and fluffy.
Add two beaten eggs and mix in well.
Slowly add the flour, and the next 3 ingredients, stirring them in well.

OR: (If you’re short on time) Put the first 7 ingredients in a food processor and whiz until mixed.

Peel and dice the apples. Dicing the apple does that mean that you will end up with little chunks of apple in the cupcakes which give it a lovely moist texture. If you grate the apple or chop it too small in a food processor the apple seems to ‘disappear’ which isn’t what you want at all.
Put the apple in a bowl, add the lemon juice and mix together – to stop the apple turning brown if you take longer than you thought to finish these.

Add the cake mixture to the apples and mix all together

Fill each about ⅔ – ¾ full. Ideally you want to end up with a small gap between the top of the cupcake and the cake case so that the icing doesn’t drizzle off the edge!

Cook at 195°C for 15 – 20 mins for fairy cake size and a little longer (24 mins) for cupcake size – until they are golden brown on top and a cocktail stick pushed into the centre of the cake comes out clean.

Cool on a wire rack

Squeeze the juice of half a lemon and add to a bowl containing 4 tablespoons of sifted icing sugar, and mix together gently. Taste! And alter according to how you want it
– more solid or sweeter – add more icing sugar
– more lemon-y or runnier consistency – add more lemon juice

Pour / spread the icing over the top of each cupcake – decorate with grated lemon zest / union jacks / as you wish – if you’re able to keep the children’s hands off them for long enough to finish this!

This entry was posted in Baking and tagged apples, Cakes, Comfort food, lemons. Bookmark the permalink.

One Response to Jubilee Apple and Lemon Cupcakes