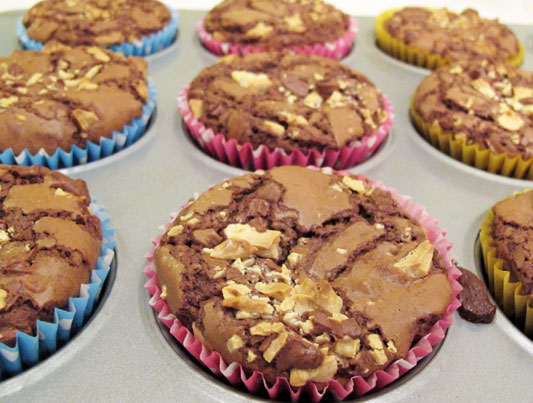 They say that cooking is a Science. So as my contribution to pushing back the frontiers I decided to do some research into how to create the Perfect Brownies – but not just ordinary Brownies, I wanted to make Brownie Cupcakes.

Now, I have to admit that I have struggled in the past with Brownie recipes. Cooking them in one big baking tin doesn’t seem to get it quite right. Somehow a brownie from the chewy centre is never quite crisp and airy enough and one from the edge of the tray never quite has that essential brownie gooey-ness. But what if you could make individual brownies? As in brownie cupcakes? Surely you should get crunchy edge with fudgy centre all in one piece?

Sounded good to me – so, back to the research.

Step 1: Typing ‘How to make Brownies’ into Google brought up all the well known names on page 1 and I looked through them all to see what the essential ingredients were and if there was some magic formula. Cocoa or not? Caster sugar or brown sugar? etc etc – you get the idea.

Step 2: Quickly decided that if there is a magic ratio of ingredients I couldn’t see it and wrote down a guess as to what might work out.

Step 3: Tried it out. It seemed wise to only make half quantities as this was a trial and my guestimated recipe contained 4 eggs and more chocolate than it seemed reasonable to ruin if it all turned into a disaster. So I started off halving everything, BUT forgot half way down the list and put in the whole amount of the last few ingredients! Ah well – cooked them anyway.

RESULT: Amazingly Delicious! Just the combination of crisp cracked shiny crust with a cake-y outside and slightly fudgy inside that I had been hoping for. The only problem was that the first batch didn’t have quite enough chocolate chips in them so we (of course) had to make another lot!

So – with thanks to all the recipes that appear on page 1 of a Google search for Chocolate Brownie Recipes – and a few tweaks since – here is the recipe for Brownie Cupcakes.

Updated!! (02/02/14) If you find the cupcakes too large, you can make them fairy-cake size – just cook for 14 minutes before cooling on a wire-rack. Chocolate Brownie Fairy-cakes – small, delicious and very more-ish!!

I’m entering these into the December Tea-time Treats link up at What Kate baked co-hosted by Lavender and Lovage – two fabulous blogs who have run this link up for a year now. The theme for this Christmas-y month is Chocolate so hopefully these will fit right in!

And, a final thought…

Should these be called Cupcakes or Muffins?? And what is the difference anyway?

Searching on the internet, the comments I have seen suggest variously that Muffins are made with oil (so these are cupcakes), and Cupcakes have icing (so these are Muffins)?

What do you think?